Melbourne, January 5,2020: Three races were held at the Australian Laser Championships today as organisers sought to make up for yesterday’s cancellations owing to high winds.

A cold and wet Melbourne morning greeted the sailors, but the forecast moderate southerly winds had settled in, providing good racing conditions. All 277 entrants were successfully launched in time for the 12.45pm start.

With the wind strength varying between 12 and 18 knots and oscillating, experience, skill and a little bit of luck were all needed.

Australia’s Tokyo 2020 representative, Matt Wearn, struck the first blow, winning the opening race ahead of Duko Bos (NED) and Richard Maher (AUS). Double world champion Nick Thompson (GBR), who won both races on the first day of competition, found himself on the wrong side of wind shifts to finish 14th. 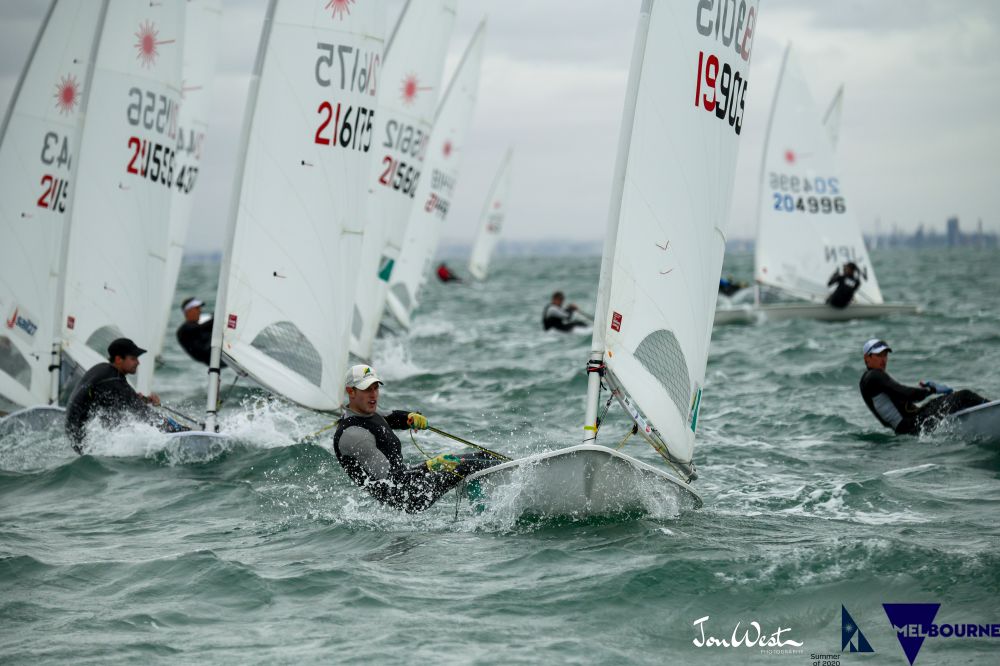 It was “all change” in race two, with Wearn down in 12th place and Thompson in 15th. However, as the fourth race of the series had been sailed, the first of two discards came in to play, leaving Wearn still at the top of the leaderboard. The race was won by Fillah Karim of Canada, from New Zealanders Sam Meech and George Gautrey.

Meech, who is ranked third in the world, won the final race from Wearn and another Aussie, Mitch Kennedy.

Both Wearn and Meech were satisfied with their day’s work, saying the conditions were shifty but readable.

Wearn called it a solid day. “The second race seemed to get real funky and I seemed to miss every shift, but I’m happy with the results,” he said.

Meech said that the conditions were similar to Auckland Harbour but the waves were a bit bigger. “The right was pretty strong all day,” he added.

Nick Thompson had a consistent day but the numbers were a lot bigger than his two bullets on Friday. He recorded 14, (15), 13 to sit in seventh overall, 18 points off the lead.

Experience came to the fore in the first race of the Radials, with 2016 Rio Olympic Champion, Marit Bouwmeester (NED) winning in Purple fleet from Marie Bolou (FRA) and Paige Railey (USA). The Dutchwoman had an excellent day, scoring 1, 3, 1 to finish on top of the leaderboard. 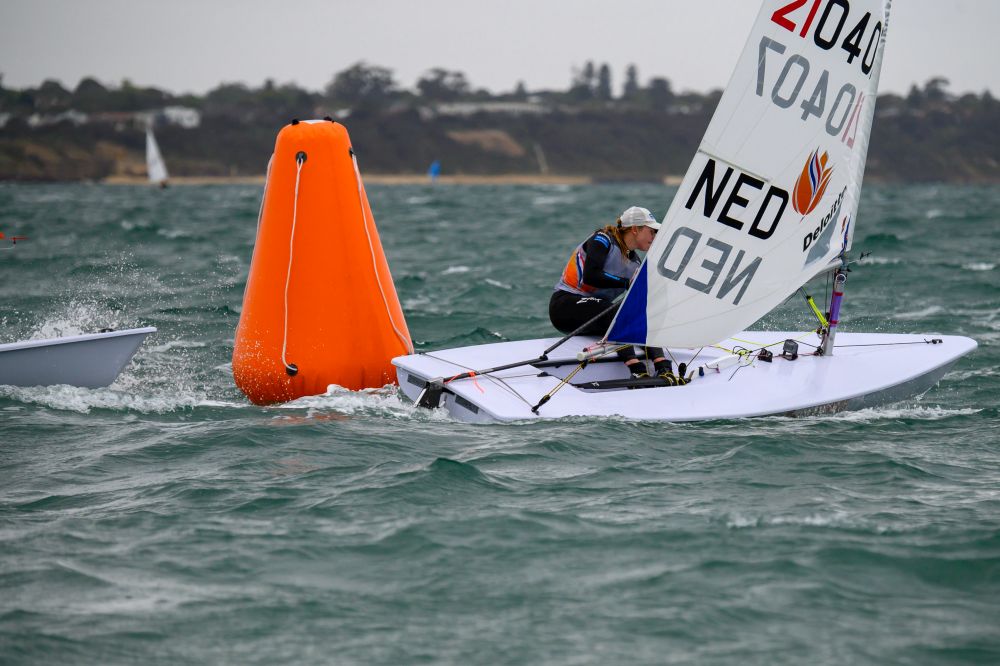 Defending champion and overnight leader Mara Stransky was seventh in the first race. She and Mirthe Akkerman (NED), who both scored two bullets on the first day, remained neck-and-neck as Akkerman finished seventh in Yellow fleet. That race was won by Rio silver medallist Annalise Murphy (IRE) from Silvia Zennaro (ITA) and the first of the male sailors, Henry Otto of NSW.

With the wind continuing to vary in both strength and direction, the second race mixed up the leaderboard considerably. Race winners were Maxime Jonker (NED) and Pernelle Michon (FRA). Mara Stransky finished 14th in Purple fleet while Mirthe Akkerman was 18th in Yellow fleet. They could both discard these high numbers, and re-focus for the final race of the day.

With the weather still cold and overcast, Annalise Murphy decided she’d had enough. Suffering from a cold picked up on the flight to Australia, she decided the fifth race could become her drop too, preferring to get warm and dry, with her eyes fixed firmly on next month’s World Championships.

The final race didn’t go to plan for Mara Stransky, who dropped her tiller while rounding the bottom mark, impeded some starboard tackers and had to do penalty turns.

“It was going well until I decided to be an idiot,” she said with customary good humour. “It wasn’t the best day.”

The damage wasn’t terminal, with the Queenslander finishing that race in 12th place, which leaves her fifth overall, 11 points behind Marit Bouwmeester. 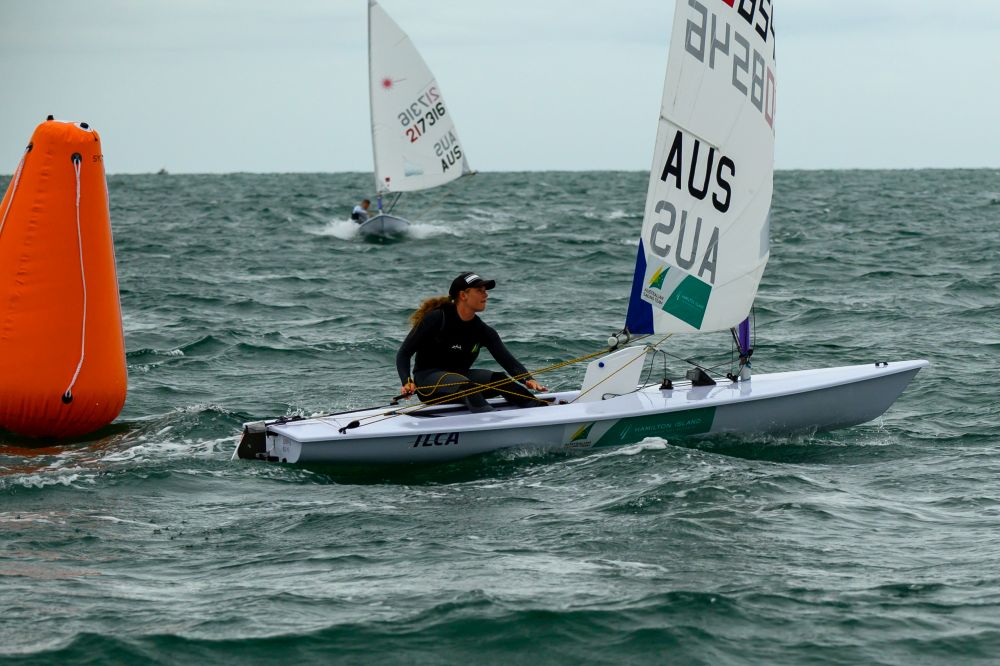 Conditions were tough for the young sailors in the 4.7 Class, but at the front of the fleet they were handling it well. Jonathon Lio from Singapore won all three races but Toby Coote from WA leads the regatta by three points after a consistent day where he scored two seconds and a third. Russell Yom has the same points as Lio, but is third on a countback. 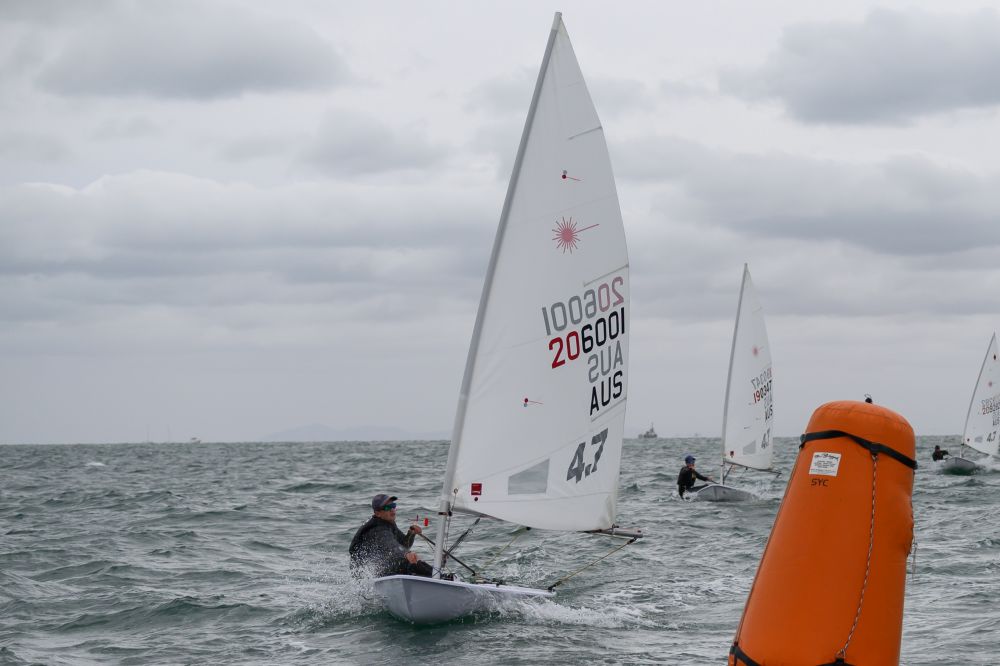 As is common in the less experienced fleets, there were a number of sailors black-flagged for being over the line at the start after a general recall at the first attempt to get a clear start.

The race committee has announced that they will try to get three races in tomorrow, to get the regatta back on course. Winds are forecast to be light, in the 6-10 knot range, and there is a chance of more showers. The temperature should be warmer, at 16-20 deg C.