Double world champion Nick Thompson of Great Britain, young Queenslander Mara Stransky, who is chasing her first Olympic Games spot, and Dutch sailor Mirthe Akkerman were the stand-out performers on the first day of the Australian Laser Championships being held at Sandringham Yacht Club in Melbourne. All three recorded a perfect score with two wins from two races.

There was almost no wind when competitors arrived for the first race of the championship, but by start time a light southerly was fluttering the flags.

Heavy smoke haze blanketed the racing area, but race management was monitoring the situation and deemed it safe to sail. 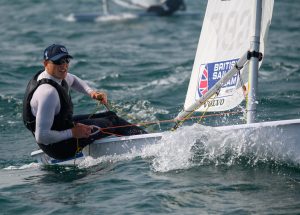 Thompson showed no signs of jet-lag, taking the win in the first race ahead of Western Australian Matt Wearn who will be Australia’s representative at the Tokyo Olympics. Another Australian, Mitch Kennedy, was third, ahead of American Olympian Charlie Buckingham.

It was more of the same for Thompson in race two, again taking the win. Buckingham sailed consistently, recording a third in the second race to leave him second overall, one point ahead of Wearn.

Thompson arrived in Australia only four days ago and decided yesterday to enter the Australian Championships to test the waters on which he will sail for the 2020 World Championship in February.

“I was jet-lagged for the first three days, but now I’m feeling great,” Thompson said.

“I’m just enjoying it, kind of chilled, I guess, because I only entered literally at the last second. It’s just a pleasure sailing in this stuff,” he said of the light to moderate southerlies that prevailed during the afternoon.

Matt Wearn was happy with his first day but felt he had slipped a few places in the second race. 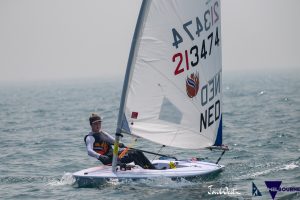 about whether it was the big shift we were expecting. It wasn’t, but I guess I hedged my bets in case it was, and I went backwards a bit. But it was a solid day.”

The Men’s and Women’s Laser Radial classes are sailing together, split into Yellow and Purple fleets.

With the Australian selection for Tokyo 2020 still to be decided, Queenslander Mara Stransky struck an early blow with two wins in Purple fleet. Yumiko Tombe of Japan was second and Marie Burrue (FRA) was third in the first race. All three were pleased to have beaten Rio 2016 gold medallist, Marit Bouwmeester, who finished fifth overall and fourth woman.

In Yellow fleet, the Dutch woman Mirthe Akkerman got the gun in race one, ahead of Agata Barwinska (POL) and Monika Mikkola (FIN).

Barwinska followed up with a third place in race two, to sit three points behind the two Australians in the overall standings 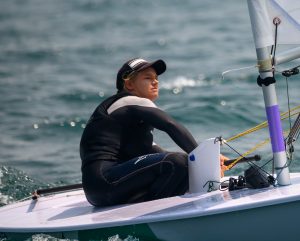 Stransky lives on her parent’s catamaran, which has been berthed at Royal Brighton Yacht Club for over a month.

“I think I’ve spent so long here that I’m confident with that wind direction (southerly),” she said.

The men were given a bit of a lesson by the women, with only Great Britain’s Finley Dickinson breaking into the top three in either fleet. He finished second in the first race of Yellow fleet and sixth in race two, to lead the men’s standings on 8 points. Sofiane Karim, a Frenchman who is living in NSW, is second male, one point behind Dickinson. Australian Stefan Elliott-Shircore is in third.

The locals had to take a back seat in the first race of the 4.7s, with Shoko Kitahara (JPN), Russell Yom and Dylan Fang, both of Singapore, filling the first three places. But in race two local sailor Edward Warner beat Kitahara and Yom. That leaves Kitahara in the overall lead from Yom, with Western Australian Toby Coote in third.

Racing continues tomorrow, with strong winds close to 30 knots forecast on Port Phillip for the afternoon. While that should blow away the bushfire smoke, it may make conditions marginal for sailing.